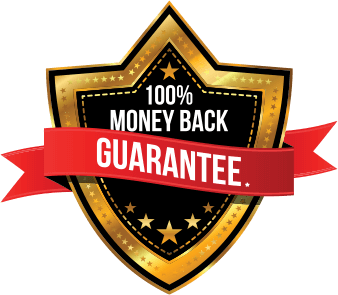 The Truth About Rising Damp

…after reading this page you’ll have knowledge about solutions for rising damp than most rising damp companies don’t want you to know!

We use more product than the competition

Here are the facts.

Rising Damp is called “Rising Damp” because the moisture starts at the base of the wall and moves slowly upwards.

The reason rising damp rises up the wall is due to capillary action, evaporation and salt..

Water rises up the wall by capillary action homogenizing through the masonry to the point where evaporation occurs. As the dampness evaporates from the wall into the atmosphere the solids that had been diluted the water will accumulate in the surface layer of the masonry as the water evaporates.

Most of the solids diluted in the water are salts. The salts accumulate in the masonry at the first point where the dampness evaporates (usually the first 10mm at the base of the wall/just above your skirting boards).

As salts accumulate in the surface of the masonry, the pores of the masonry become more and more blocked with salts which slows down the evaporation in that lowest 10mm of the wall. The water then rises above those masonry pores which have been partially blocked by salts to the NEXT point of least resistance (just above the salt which has already been deposited) to evaporate more easily.

Now the salts are damaging 20mm of the lowest point of your walls. The salt damage will keep rising up the wall until the weight of the water has enough downwards force (from gravity) that the water cannot rise any higher, even if the pores of the masonry beneath the highest point of vertical capillary action are already semi restricted by prior salt accumulation.

From this point on (if you don’t do something about it) the dampness will continue to evaporate from the already salt effected areas, accumulating to the point that the surface of the masonry eventually crumbles to dust!

(It can take some years for rising damp to become a structural issue).

Textbook rising damp does not generally go above around one metre in height, there are other factors that can cause it to go above one metre. As a general rule of thumb, if you have what looks like rising damp coming out half way up a wall (say 1.6m above the floor without any damage below that point) or from the ceiling, then it is highly likely that it is not rising damp but a hole in the wall from an air conditioning unit, vent, extension joint, balcony or a crack.

Rising damp with exposed brick will normally show with deterioration of the mortar between the bricks and after some time the bricks will start to collapse.

Rising damp with render will usually show in “bubbling paint” (it starts out looking more like pimples in the paint), salt deposits, stains and render breaking down to its base components (appearing as sand and cement dust).

The damage resulting from Rising damp is not caused by the actual water its self, water is just the carrier for diluted salts. Water travels through masonry via capillary action which causes the masonry to become damp.

Water is the vehicle that carries the salt.

As waterproofers we see dampness and wetness as two distinctly different problems. There is a difference between damage from water and damage from dampness.

The damage you can see from rising damp is most often from salt. When salt is dry it is stable and when it is wet it is stable. As salt dries, salt crystals grow. These salt crystals grow between the tiny bonds of the sand and cement particles that make up the masonry and causes the bond between the sand and cement to “unstick”. When the bond is broken, the once solid masonry will return to its base components of individual grains of sand and cement, showing at the base of the wall as masonry dust.

Salt is transported up the wall by water (the vehicle).

The catalyst for the damage caused by rising damp is evaporation. If masonry is holding water that contains diluted salts, the water evaporates, leaving the solids behind. The solids are the salts. The accumulation of salt crystals is what causes your masonry to turn to dust and bubble your paint.

Therefore, MORE evaporation actually SPEEDS UP the damage being caused by the rising damp.

Evaporation is the “ENGINE” that drives rising damp.

Rising Damp injection creates a barrier in the masonry which stops water from rising any further through the masonry by capillary action. When the water stops rising, no more additional damaging salts can be deposited in your walls at the evaporation point above the injected layer. Any salt that was deposited at the evaporation point due to the prior rising damp WILL remain in the substrate unless the salts are removed. The salts can be removed by either removing your render and re-rendering OR the salts can be removed from raw masonry (not painted or rendered) by using the cocoon salt removal system. Below you can read more about if you *really* need to remove the render from your walls or if you can AVOID the additional cost of render removal and re-rendering. It is a good idea to know as much as possible about rising damp. Rising damp and the solutions for rising damp are basic physics and are very logical.

You can see the rising damp injection fluid above is totally penetrating and flooding the bricks.

(Further down this page there is a video you’ll watch of a wall which we will spray with water 2 years after our injection was completed. In that video you’ll clearly see that the the whole wall and floor changes colour as it absorbs water EXCEPT the chemically injected damp course which clearly remains dry as the water beads off it).

Rising damp is an industry that has exploded over the past twenty years due to aging buildings built with obsolete construction methods.

There are many rising damp solutions available and it is worth knowing all your options before making a commitment.

Read this page to learn more about rising damp so you can make a more informed decision when either choosing us or any other provider.

We are Licenced Waterproofers and we have a reputation for dealing with some pretty crazy underground waterproofing problems. When we deal with running water through the wall of a basement in Vaucluse and the client puts a cinema in the room after we have finished waterproofing, what we do REALLY needs to work and we need to trust the products we use so we get the longest lasting result.

We use the best systems because it almost totally limits our liability and the chance of failure is very close to zero.

We don’t take any chances with people’s homes. 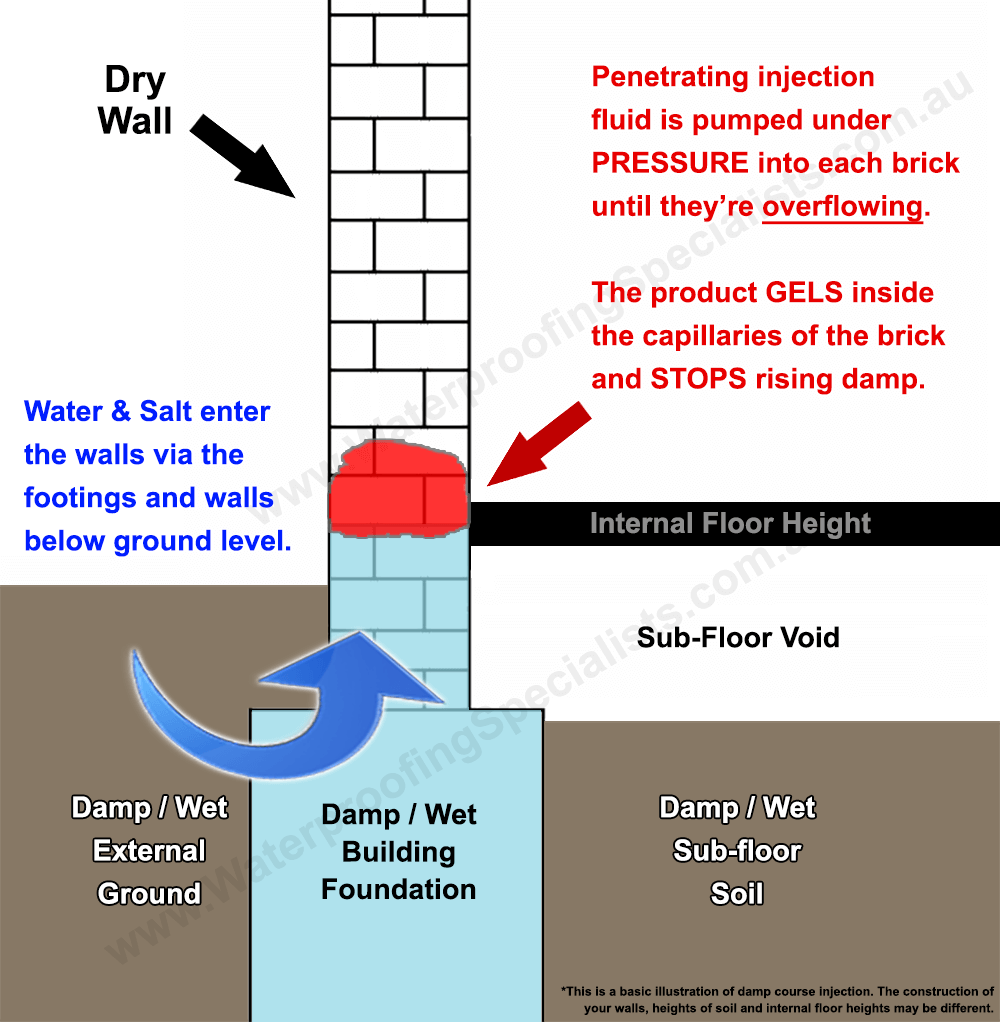 See The Damp Proofing Product Working With Your Own Eyes.

The video above is of a wall that we injected for rising damp in Sydney.

We successfully stopped the rising damp although they had another issue 2 years later during the huge Sydney storms in February 2020 where their basement flooded through their basement retaining wall.

We removed all the render from the walls of the basement from floor to ceiling. The water you can see being sprayed on the walls is in preparation for a negative side basement membrane (the substrate needs to be damp for the membrane to be applied for proper adhesion).

Do You *Really* Need To Remove The Render From Your Walls??

The short answer is NO you don’t always need to remove the render, but often you do.

These solids accumulate at the evaporation point which is the surface of the render. Salts are HYDROSCOPIC meaning that they attract moisture, water and salt bond together very easily.

You know when it rains and you leave the salt open in the kitchen and it all sticks together? That’s because the salt is bonding with the water from the air.

If you have a high level of salt in your walls, the SALT is bonds with the moisture from the atmosphere and accumulates in the walls until the walls are visibly wet. Your walls can even sweat and have water beading on the surface to the point that water runs down the wall.

Taking the above into consideration, if you install a rising damp solution and there is a high percentage of salt that was deposited at the evaporation point due to the prior rising damp, the salt will remain in the wall unless the salts are removed. If the salts are left in the substrate above the newly installed damp course, they can still attract enough moisture from the atmosphere to be REACTIVATED. As these reactivated salts dry, they RECRYSTALISE (turn from liquid to a solid again) which causes the bonds between the sand and cement in the render to be broken apart (again) and the damage continues.

That is why often you are recommended to remove the render from the walls if you have rising damp.

Having said all of that, you don’t always need to remove the render. Sometimes there is no damage showing so there may be a lower chance that you get damage in the future. It’s something we review on a case by case basis.

Another little secret most rising damp contractors won’t tell you is that if you have salt in the substrate above the new injection line and it is not removed, the NEW DAMP COURSE can actually CAUSE the walls to result with MORE damage (because when salt is wet it is not crystallising, the dampness in the walls can sometimes hold the salts in a stable non-solid state). This additional damage can sometimes happen when the salt is not removed because the new damp course finally allows the walls to dry fully and as the salt dries, it crystallises.

How do you know how much salt is in the wall from rising damp?

The short answer is you can’t unless you take a sample and get it tested. We can get that done for you but it is not such a cheap process. Usually bigger builders with large jobs get testing done.

Generally we can tell by the reading on the moisture meter, our trained eye and other clues around your house that will point us to the conclusion about if your house had been patched up and previous damage from rising damp had been hidden.

The best way to know what’s going on is to give us a call and we’ll come and have a look at your rising damp.

This house Is In URGENT Need Of Rising Damp Treatment

Rising Damp in Sydney is a common problem and we are specialists in rising damp. Click below to see our rising damp solutions.

Dincel waterproofing is needed when you never want Dincel to leak. While dincel is sold as being waterproof, often it still leaks.
We can stop Dincel leaking.

Retaining walls or below ground walls need special treatment so the waterproofing doesn’t fail over time due to salt breaking the membrane. Learn More.. 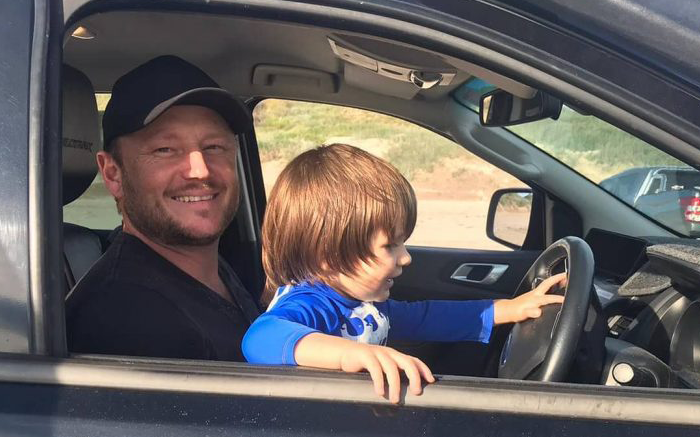 If you have some questions then we can have a quick chat.